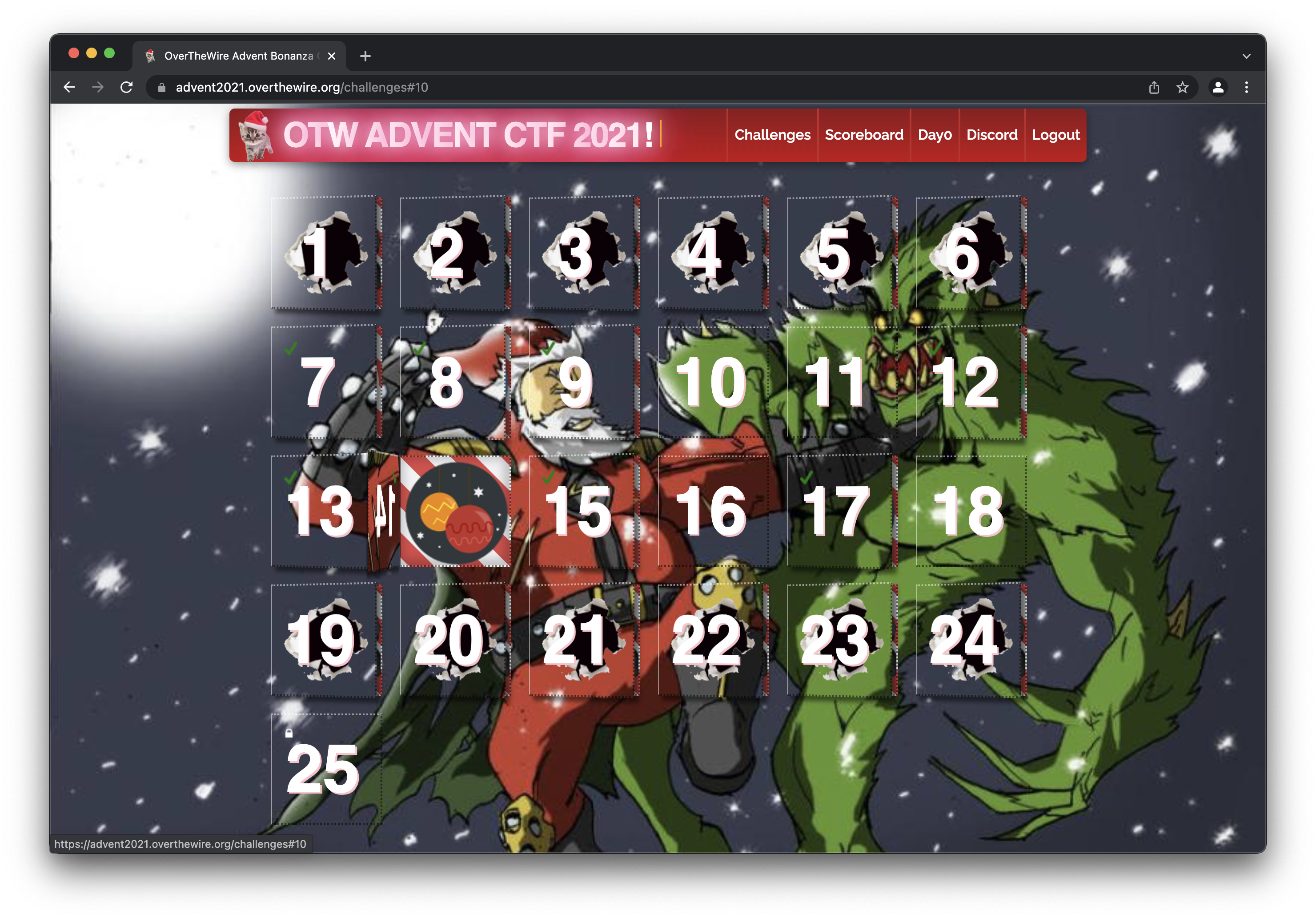 We stumbled upong OverTheWire:s Advent Bonanza CTF in 2019 and we were instantly hooked. The whole idea of releasing one new hacking challenge every day is genius and very addictive for the participants. At Cybix we even started a new thing called lunch-hacking. Eating food while hacking on the latest challenge during december is a new tradition.

So you can only guess our frustration when the 2020 edition of this CTF was canceled. :( But this year it turned into total happiness when it was clear that OverTheWire Advent Bonanza 2021 kicked of. That adrenalin rush brought us all the way to place 12 this year. 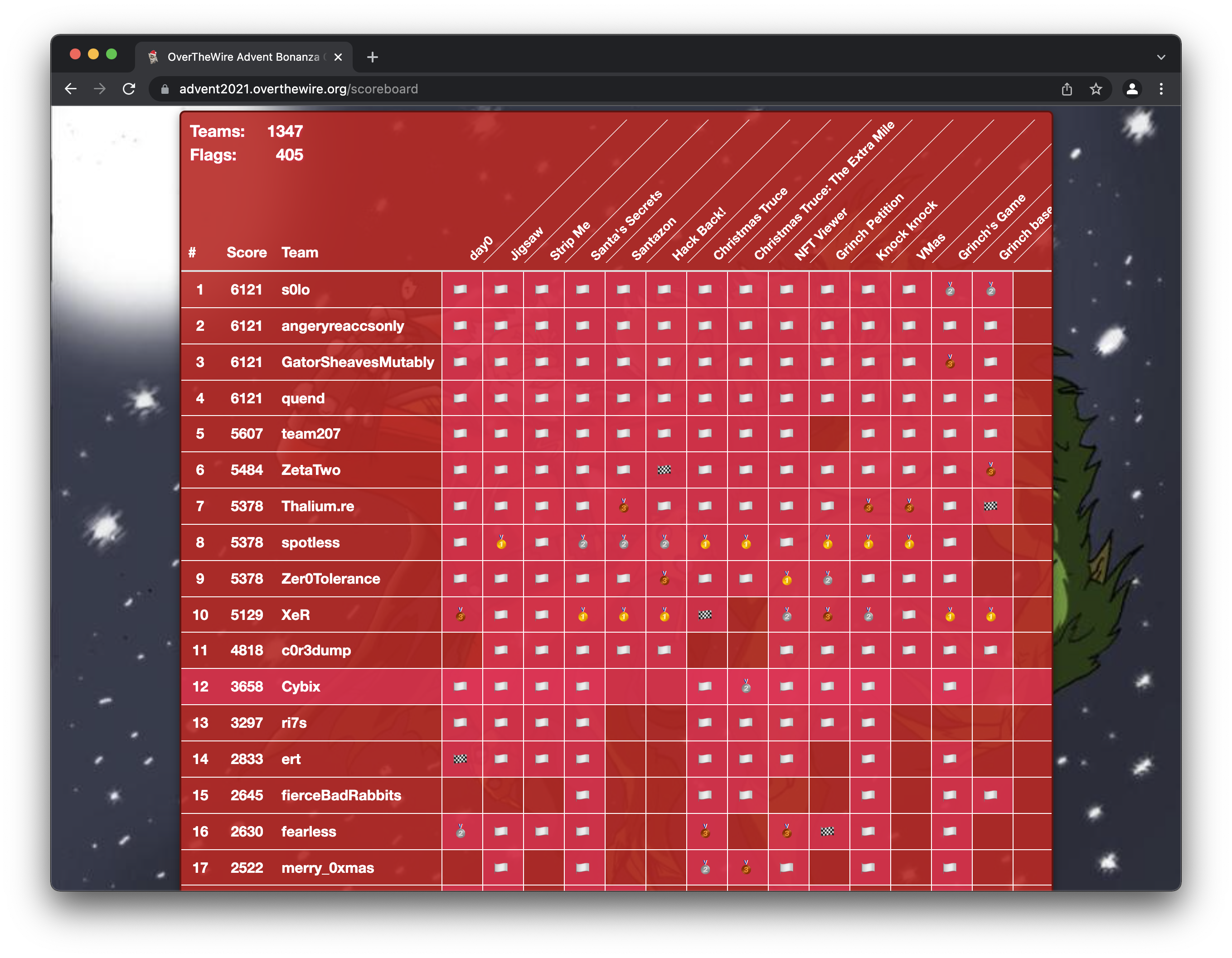 Sometimes bragging is ok even if you do not win :) We are very happy with our 12:th place out of 1347 teams. After all this is a competition held in the middle of all christmas preparations. There’s christmas partys to arrange and attend. And still we have our number one priority in giving our customers the best of service.

To add one more stressfull thing in the middle of all this the Log4Shell CVE exploded like a bomb. It’s really cool that the organizers of the competiton managed to squeeze that vulnerability into the competition with such short notice.

Cause that’s what they did with the challenge called Grinch Petition. Here follows a writeup showing just how easy it is to exploit CVE-2021-44228 using one of the many PoC:s out there.

Behind that cover on the 14:th of december you could find this: 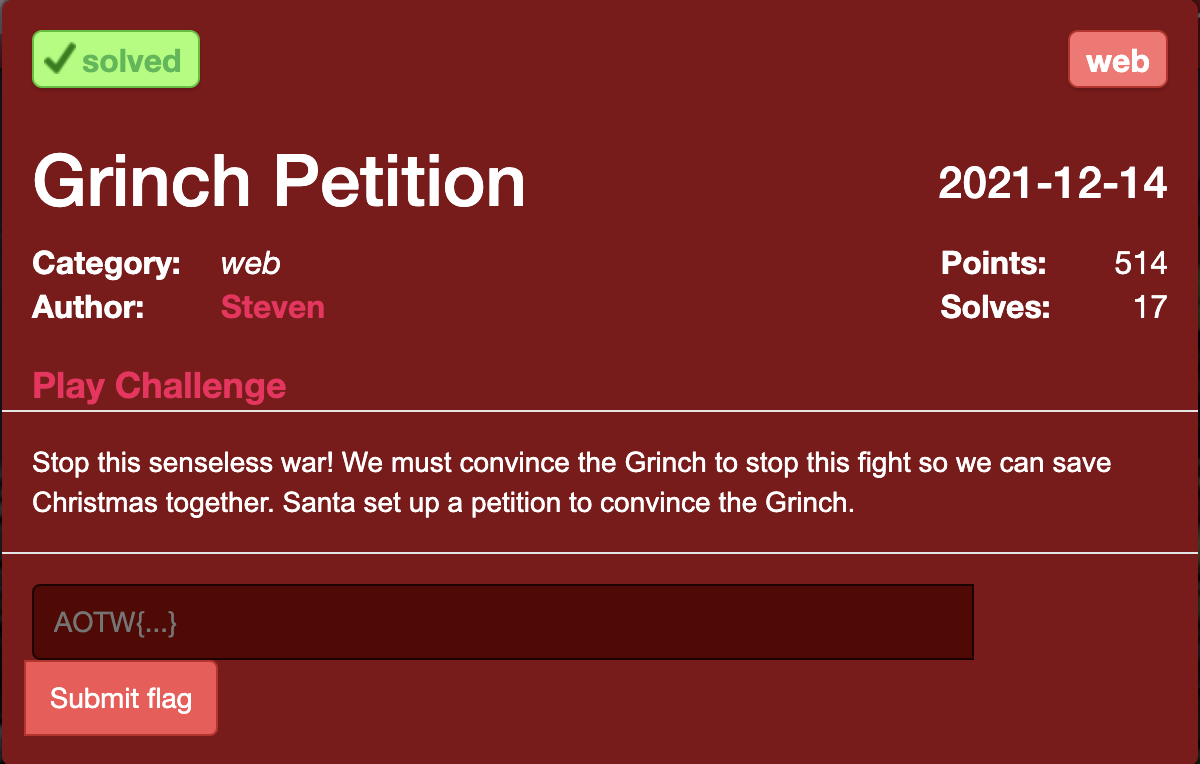 Not much information there so let’s click the Play Challenge link to get started right away. 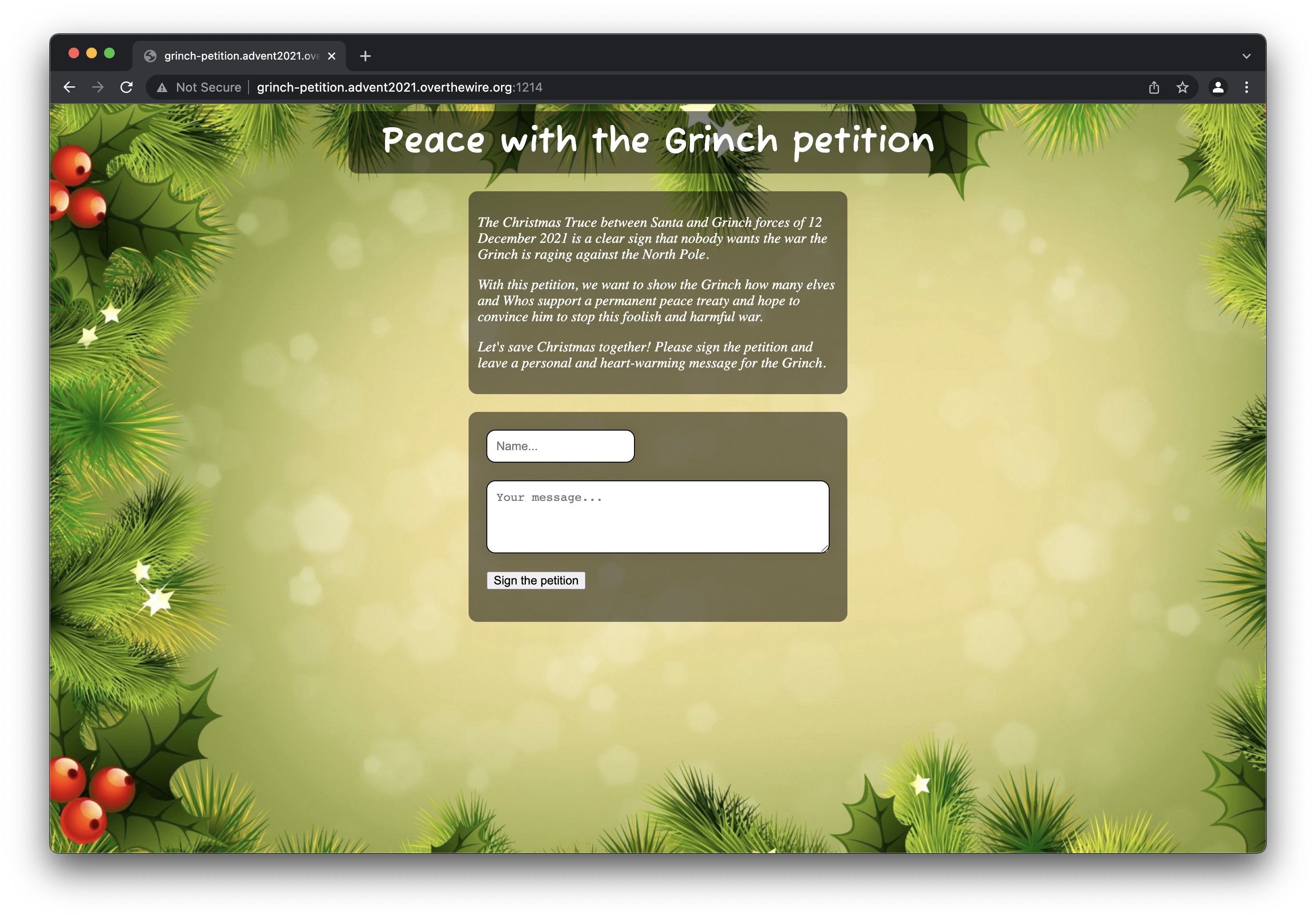 That’s a petition there. Not much more information to gather here. Time to start poking around in the web application and see if we can find something interesting.

Searching the web application for vulnerabilities 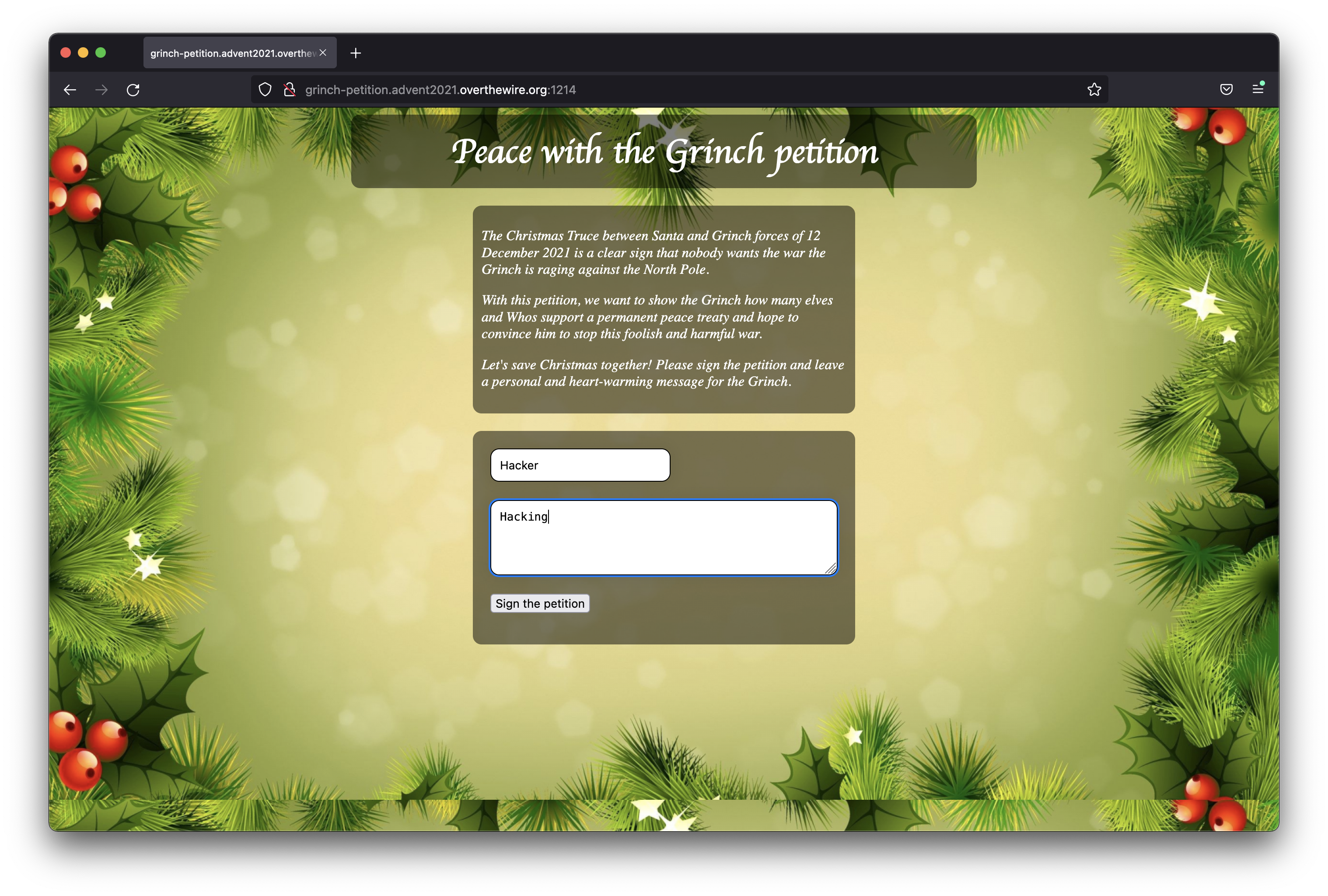 It seems to be a quite simple web application. We can set a name, message and push the “Sign the petition” button to post our message. Let’s try it. 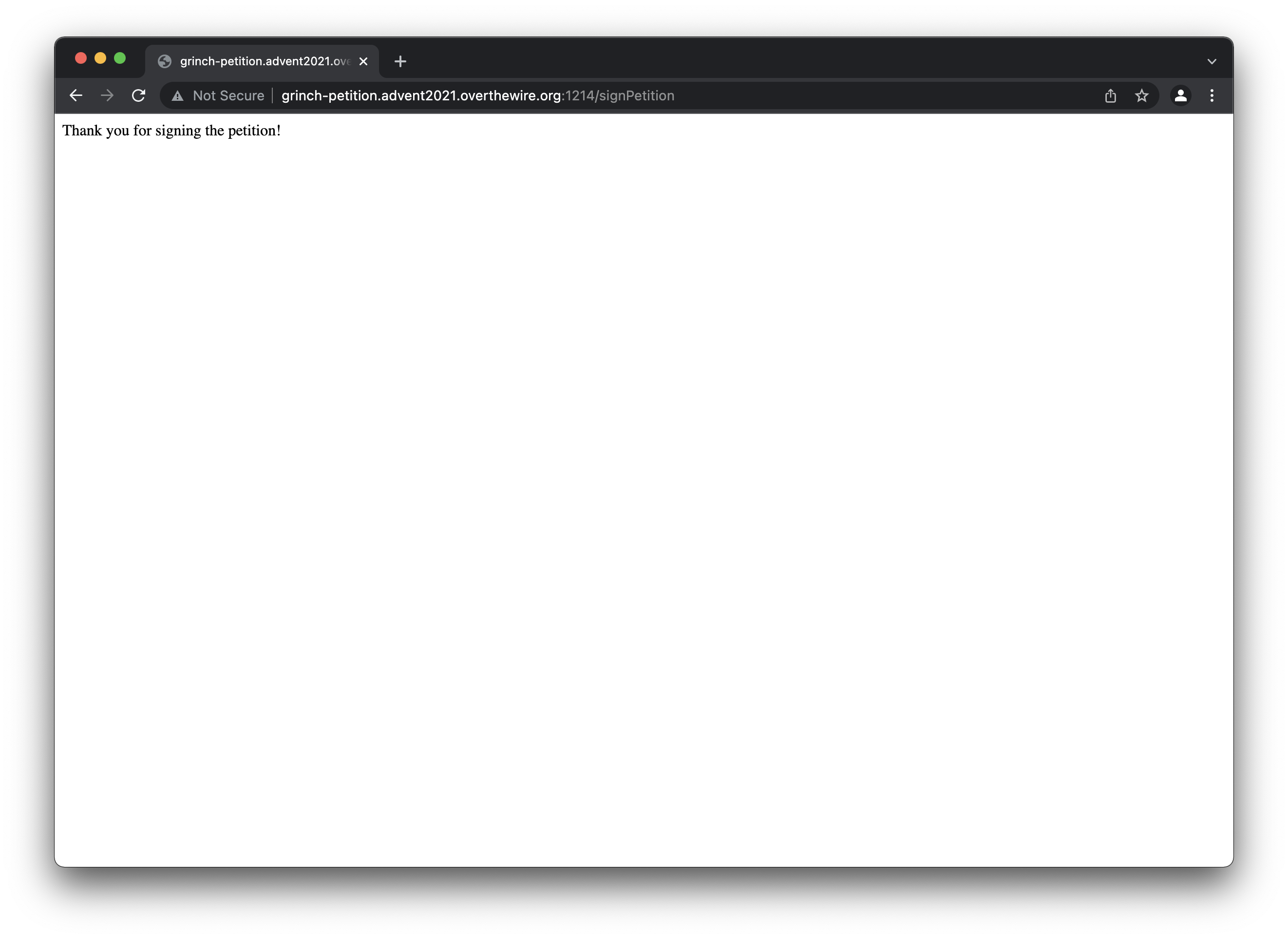 So everything looks ok. But nothing of real interest seems to have happened. Let’s use the developer tools to see what happend behind the scenes. 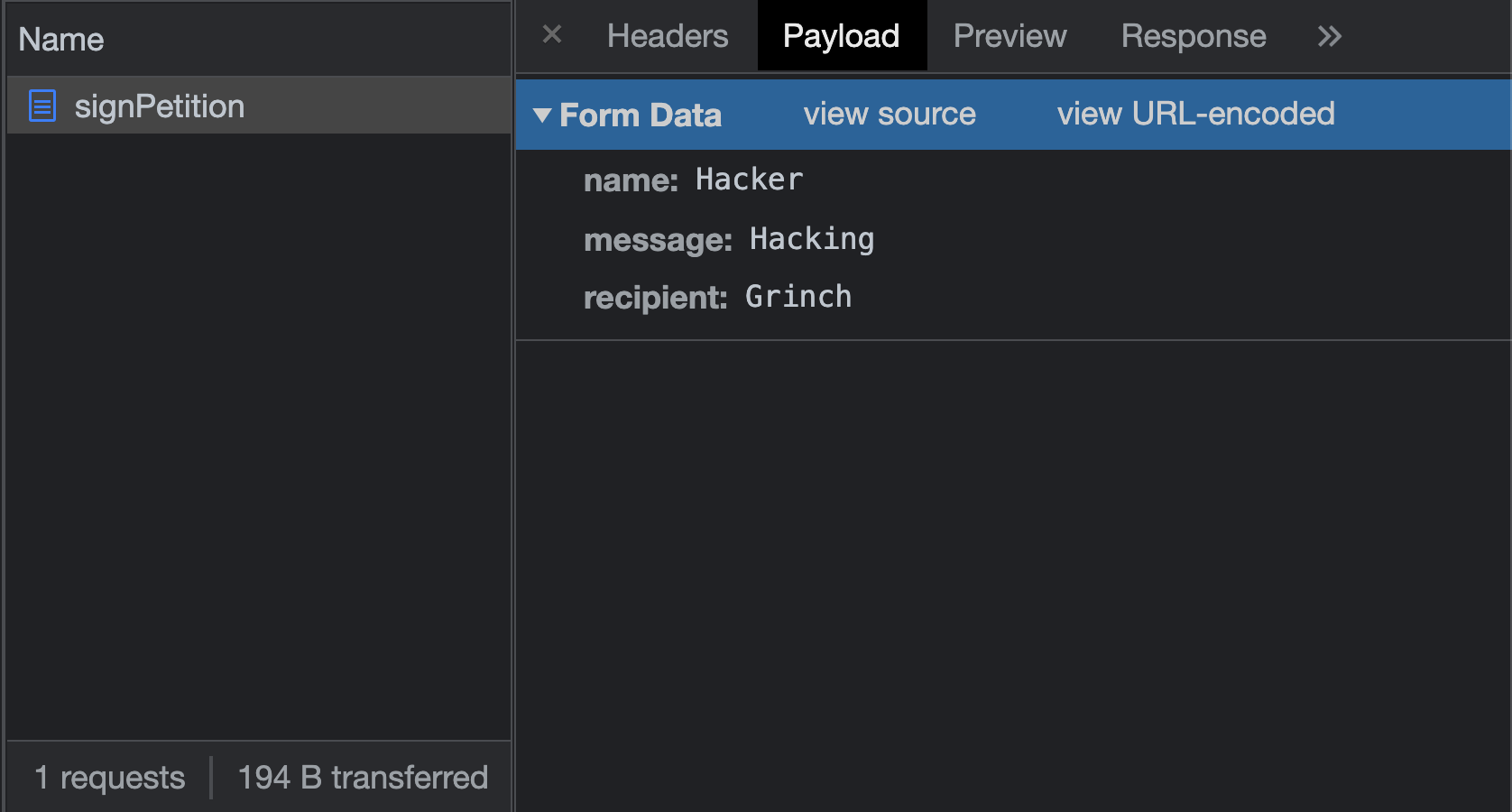 It seems that we have 3 fields (name, message and recipient) to play around with in our POST. But before we dive into that let’s investigate the page further.

Reverse engineering the HTML and Javascript

That’s a rather standard html post form. But what caught my eye is that name and message is present in the html but recipient is not. So somewhere that must be added. Let’s examine the usual suspects. In this case app.js:

OHHH NOOO. That’s a terrible javascript. it’s rather obfuscated, seeems like it’s using some recursing and some of those javascript tricks that can be so annoying when everything is an object.

I spent a good two hours or more reversing this script. I decoded that array of base64 encoded stuff and other mumbo jumbo in the begining of app.js.

It turned out that all it did was adding that recipient field with Grinchen to the payload before POST. Total frustration for spending so much time on nothing. It’s about time we start fiddling with the web app for real.

We can send stuff to that web application and see if we can get it to crash or respond in some unintended way. Let’s start with a post including that recipient field to see if it works:

That worked alright. Now let’s try to remove that recipient field and see what happens:

Well that did not work out well. Let’s try to add the recipient field again and change it:

Hmm, that did not work but at least a different message. Let’s try sending the usual suspects of different characters to make it crash.

We spent another two hours at this point trying different stuff in all of the fields but without any interesting result. At this point I remembered that we had problems accessing the site with Burp Suite as an in between proxy at the very start. Since this was a CTF we were in a hurry and just moved on without Burp Suite.

Let’s take a step back and see what that was all about.

So we fired up that good old Firefox and Burp Suite to capture all the traffic. We sent a post and yes there is still an error. I still have no idea why it displays this error when using Burp Suite. It seems as the recipient field was not added when using Burp Suite, we did not dig deeper to find out why. 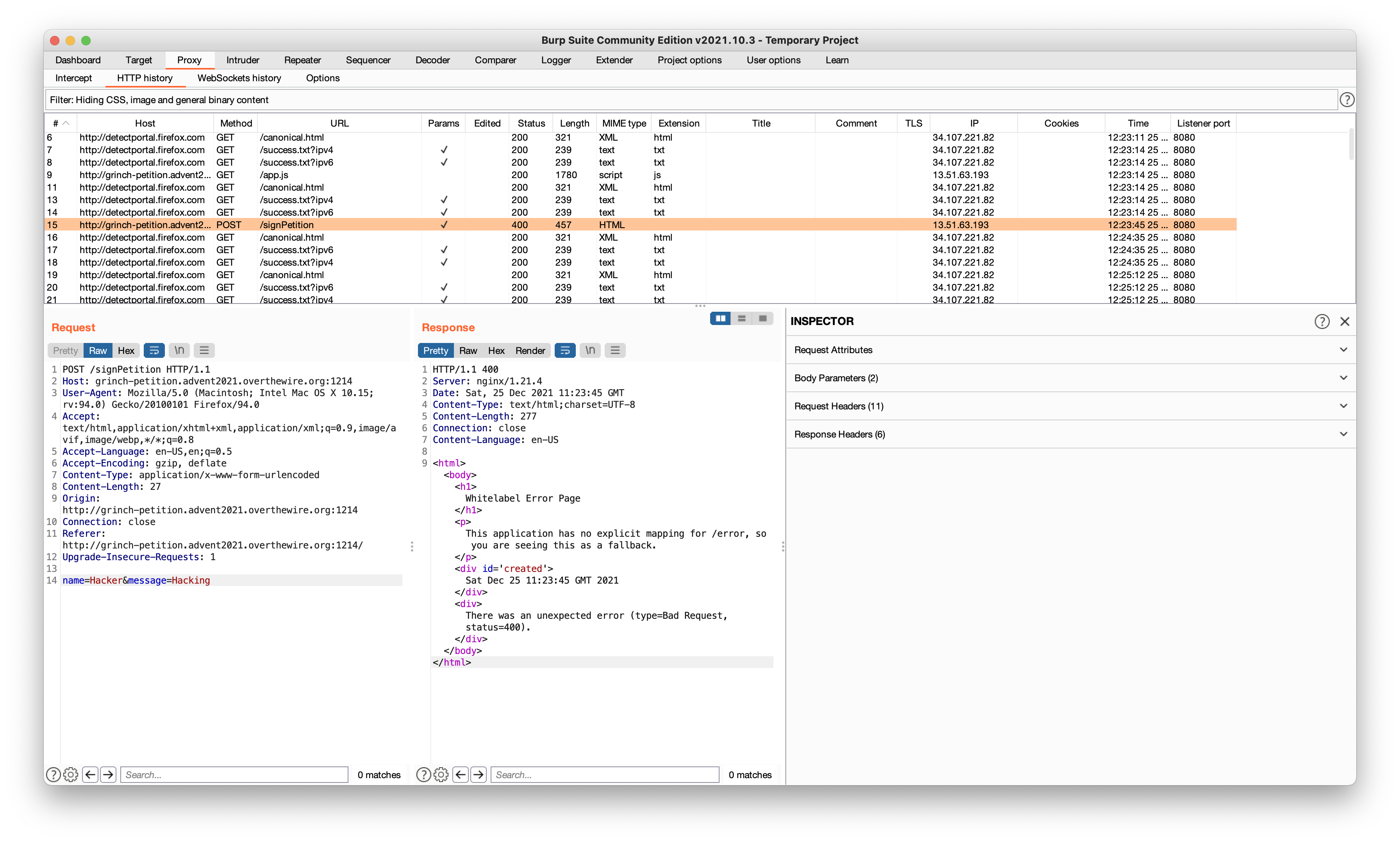 When you look at it in the web browser it says “Whitelabel Error Page”. 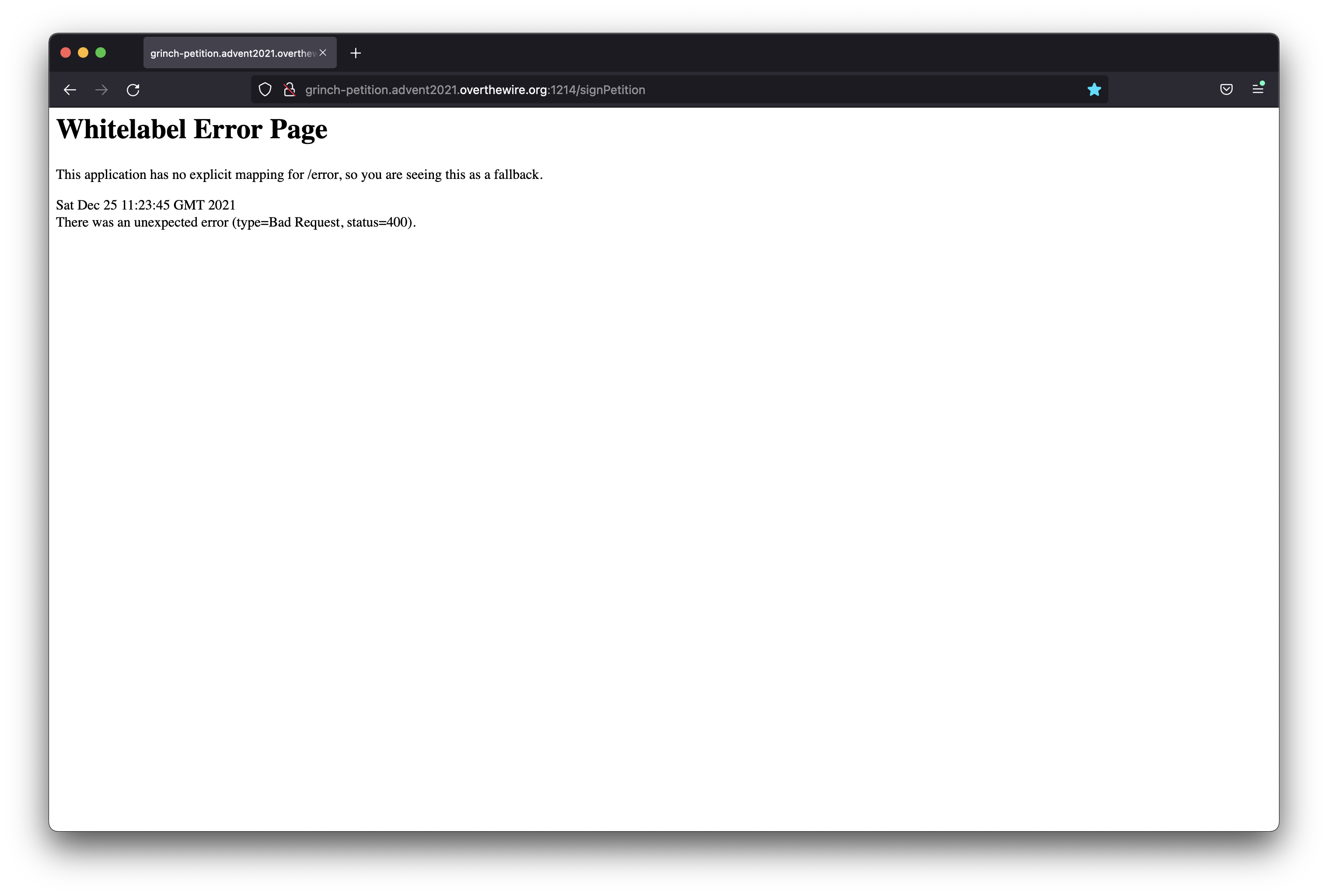 A quick google search and the first thing you find is this:

ARRGH!!! WHY did we not check that error message from the start. This is some pretty interesting information. Spring is a rather famous Java framework and now we can narrow down our fuzzing just a bit.

The Log4Shell CVE-2021-44228 was published just 4 days before this challenge. It was a lot of buzz about it in social media and about every single place you looked. One of our team members actually had to quit the CTF because of all work with the vulnerability.

So of course Log4Shell was the first thing we thought about when we realised that it was a Java application somewhere behind the scenes. It seemed VERY unlikley that the organizers already implemented this into one of the challenges but it would be very stupid not to try it.

First of all let’s start a listener to see if the JNDI payload tries to connect back to us.

Now just grab a payload from any of the thousand posts on LinkedIn and adjust it to our listener and see if something happens.

What the hell??? It hangs. Let’s take a look at the listener.

We could not belive our tired hacker eyes. They managed to put a few days old vulnerability into the contest. That’s just soooo cool.

At this time we started discussing the possibility that this was unintended and we were actually hitting something else. With the nature of the Log4Shell vulnerability it could be totally possible that we hit something else entirely and we could actually be doing something illegal.

After some thinking we thought that it’s probably the challenge after all but in worst case it could be the CTF infrastructure and as long as we did not destroy anything we decided to move on.

Spawning a reverse shell via RCE

At this time the internet was flooded with Log4Shell stuff and there was absolutley no lack of PoC:s to use. After some studying of available exploits we found out that we needed to use something like this: https://github.com/mbechler/marshalsec to redirect the LDAP request to a http server. At the http server we should host a compiled java reverse shell like this:

We got that attack chain working so that the LDAP request was redirected to our http server. Our Exploit.class was delivered from our http server to the target but at that point nothing seemed to happen. we tried different sleep strategies but we could not verify there was any RCE.

We were so close and after some thinking we realised that it’s probably a matter of Java versions and some variant of the payload. Then one of our team members found this https://github.com/kozmer/log4j-shell-poc Let’s take a closer look at the included poc.py:

After quickly reading through the script we realised that it just automates the exact same things we tried to do manually. It generates an Exploit.java and compiles it into an Exploit.class that is hosted by a http server. It also uses the marshalsec to redirect that first JNDI call to the web server. It seems it’s using another Java version than we did manually and the Exploit.java is another variant.

Let’s try it out:

After cloning it from github and installing the required libs you need to put a JDK in the same directory and name it jdk1.8.0_20 It can be downloaded from Oracle but you need to register an account before downloading. When everything is in place just make sure it looks like this:

Now everything is ready to use. Let’s start the automated PoC. The parameter –userip should be your public available ip and –lport is where we will start up netcat for our reverse shell.

Our listener is ready and listening, it’s time to fire of our payload:

It hangs…. let’s check out our listener.

YES! We have a reverse shell and the flag is in /flag.txt. Mission accomplished.

Many thank’s to the organizers for putting in a vulnerability that is just a few days old. My guess is that this challenge should have been something else completly. But with that complete shitstorm that came out of CVE-2021-44228 it was a really cool idea to put it in the CTF.

We finished this challenge as one of the top 10 teams. But we could probably have been top 3 here if we had checked out that Burp Suite problem early on. So there’s something to learn here. If you see an error message that you do not recognize you should ALWAYS study it closer before you proceed with other things.

CTF:s sometimes get you stressed up and you deviate from your usual pentesting path. When time is a more important factor than complete coverage and documentation you take other paths. This was an awsome fun challenge like most of the challenges this year. You can read more about the competition over at ctftime.org Perhaps we will publish some more writeups from this CTF, until then:

We wish you a Merry Christmas and Happy Hacking!